As you can see by the title of the post, we aren’t in Jasper, Alberta as we were supposed to be. Last night after I finished the blog, I checked the weather for our trip today and realized that they were calling for rain and storms and temperatures in the 50’s for our planned over 400 mile route. That just really didn’t sound appealing to us, we wouldn’t have been able to see the things we wanted to see, and it would have been pretty miserable riding. Plus if the storms happened to get severe while we were on the parkway, I’m not sure that there are a lot of places to take cover.

We spent over an hour checking weather and room vacancies in different locations and trying to decide what we were going to do. By the time we were too tired to keep our eyes open anymore, we still didn’t really know what we were going to do, but we figured we would check the weather in the morning to be sure, and decide from there.

I woke up about 20 minutes before the alarm was supposed to go off and checked the weather, but the precipitation chances had only gotten higher, so I knew that going to Jasper wasn’t going to happen. For some reason I had the idea to check the areas West of Banff to see what the weather looked like for that area, and it looked like it was going to be about 70 degrees and overcast, but no rain, and it turned out that there were rewards nights available in Vernon and Golden, so I woke Dwayne up and told him my idea, and we decided to book the room in Golden and go for it.

We had a few issues with our hotel room that we had to take care of before we left (was supposed to be a rewards night, someone screwed up, but after some back and forth, they took care of it), and Dwayne had to go to Lowes and get some 3M tape for his headset mount because it was getting dangerously close to falling off, so we were a little later leaving the hotel than we had intended, but we were on the road around 8. That really wasn’t a big deal since our trip was only 5 hours today anyways.

Google Maps sent us on a “shortcut” around Whitefish, which was fine, except we were cruising down the road about 55mph when it unexpectedly turned to gravel with no notice at all. Luckily, the Heidenau tires we are running make gravel feel like pavement, so there was really no “Oh Shit” moment like there would have been on the street tires we were running before. Of course, we love a good gravel road, but this one was in need of being grated, and had quite a few washboard sections. It was a nice scenic detour though, so we really didn’t mind.

About 2 hours after leaving the hotel, and after stopping for fuel in Eureka, Montana, we arrived at the Canadian border. I was a bit nervous as I’ve never crossed a border before, and I’ve never been to Canada, so I made Dwayne go first. The border agent asked him a lot of questions and asked for his plate number, and then let him continue on. When it was my turn, he only asked me about a 3rd of the questions he had asked Dwayne, and didn’t ask for my plate number, and then told me I was good to go.

We probably drove the locals a bit crazy as we set our cruise to the speed limit for the first hour or so after we crossed into Canada, but after being passed by tons of people going much faster than us, we bumped the speed up a bit, but not enough that we would be likely to get a ticket. Luckily our bikes have the option to switch from miles to kilometers, so Dwayne switched his over so we would know how fast we were actually going. Sorry kids, I’m not all that familiar with the metric system, I’ve never had a reason to be, but I’m learning. I’m sure that makes some of you roll your eyes at me, and that’s okay, I deserve that 😉

The ride up 93/95 was absolutely beautiful. We only stopped for one picture today, and it was not too long after we had crossed into Canada, but it gives you an idea of how beautiful it is here. The mountains line both sides of the road off in the distance, and they are just towering and majestic.

Unfortunately, British Columbia is battling over 100 wildfires right now, and the closer to Golden we got, the worse the smoke around the mountains to the West of us got. By the time we arrived, you could just make out the shadowy outline of the mountains, as the smoke surrounding them was too thick to allow a good view. This made me even more sad when we arrived at our hotel and they upgraded our room to a mountain view suite, but you can’t really see the mountains well, and you certainly can’t get a good photograph of them. I know the view here would normally be breathtakingly beautiful, but it is hard to imagine with the way it currently looks. I hope that it will be clearer in Banff tomorrow, but we shall see. At least it is supposed to be sunnier tomorrow, so perhaps that will help with visibility, I don’t know. It was very overcast today on top of the smoke, so that didn’t help things any. 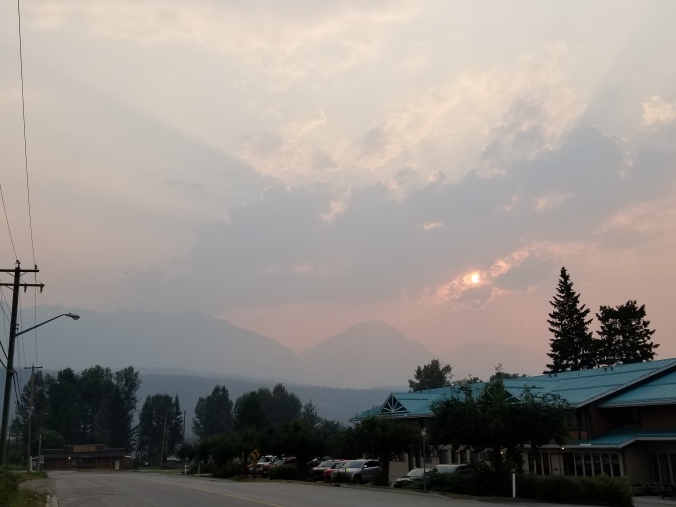