We woke up at 6am this morning and got things pretty much packed up before our 6:30 hotel breakfast. After Dwayne checked the bikes over and we were ready to go, it was around 7:30 when we left the hotel. As we were going to leave, we ran into a couple on a Goldwing Trike who had stayed at the same hotel as us in Kalispell as well. We chatted with them a bit, and we wished each other safe travels and a good day and they headed out ahead of us.

Upon loading the bags onto the bikes, we realized that somewhere along our travels, one of the bolts that holds Dwayne’s luggage racks on the bike had fallen out. Luckily the mount is mounted in other places as well, and it still seems very sturdy, so we are just going to be sure to not go too fast until we get to Missoula tomorrow and there is a Triumph dealer there, so we will see if they can fix it for us. If not, I’m sure a hardware store will have a bolt we can use.

We took Hwy 1 out of Golden towards Banff, and it was a beautiful ride, although the smoke was still an issue today and kept us from being able to see the mountains as well as you would be able to on a clear day. As we rode towards the turn off for Emerald Lake and Natural Bridge, we passed the couple on the Goldwing and waved to them, then just down the road, we pulled off on a side road to take some pictures of the mountains ahead of us and they passed us back.

We ended up turning down the road for Emerald Lake and Natural Bridge a little way behind them. They pulled off at Natural Bridge, and we continued on to Emerald Lake. It was awe inspiring. It seemed so peaceful there, even though there were people around, and the lake and mountains surrounding it will bring a tear to your eye, they are just so unbelievably beautiful. 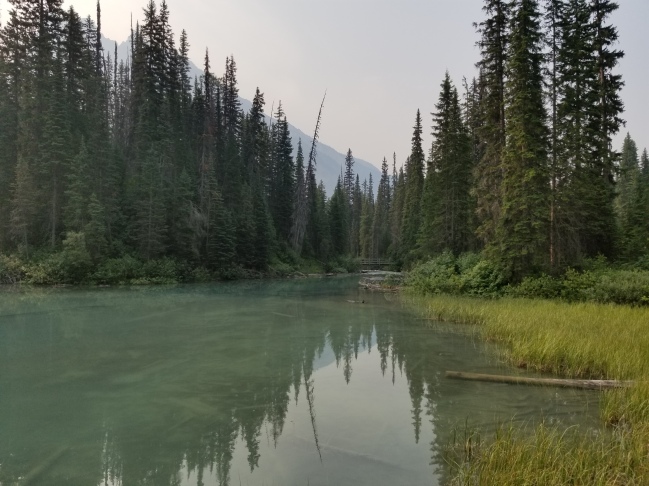 As we left Emerald Lake and headed back towards Natural Bridge, the couple on the Goldwing was just pulling into Emerald Lake. We spent a little bit at Natural Bridge, waiting for a bus of tourists to clear out so we could get some pictures without a bunch of random people in them, and when we went to leave, we pulled back onto the road just in front of the couple on the Goldwing again, and this time they followed us. 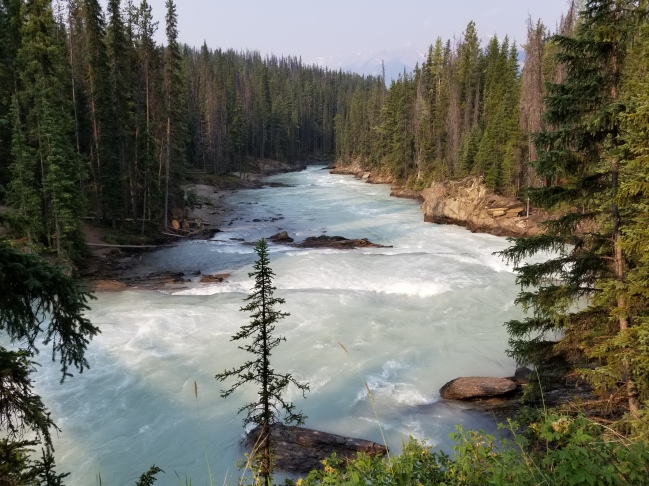 From there we went a bit further to the road to Takkakaw Falls. Unforunately a tour bus was in front of us, so we decided to pull off after we crossed a bridge over a beautiful turquoise river to take some pictures and let them get further ahead of us so we didn’t have to follow them up and through the super tight switchback section, that I am still amazed that they could even make it through. 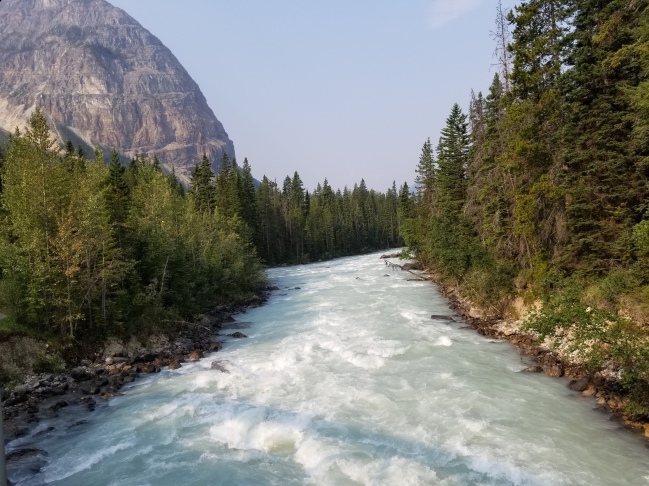 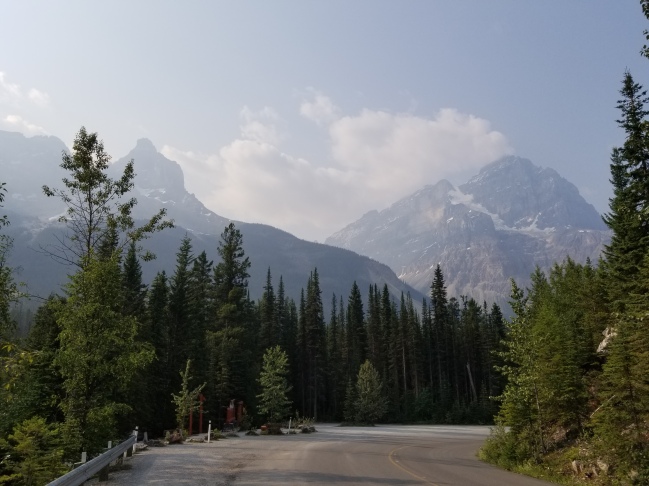 After stopping a couple more times, we continued on towards the falls, and after coming around a corner, we were greeted with an enormous, breathtaking waterfall. I am pretty sure we both said, “Woooooow!” at the same time when we saw it. We stopped to take a distant shot of it, and then went to the parking area and made the hike to the base of the falls. It was well worth the walk. The falls were so loud, and you could feel the spray off of them from quite a distance. We spent quite a bit of time taking pictures from different vantage points. When we went to leave there we noticed the Goldwing Trike again, but we must have missed each other somewhere along the trail, because we never saw them on our hike back from the falls. 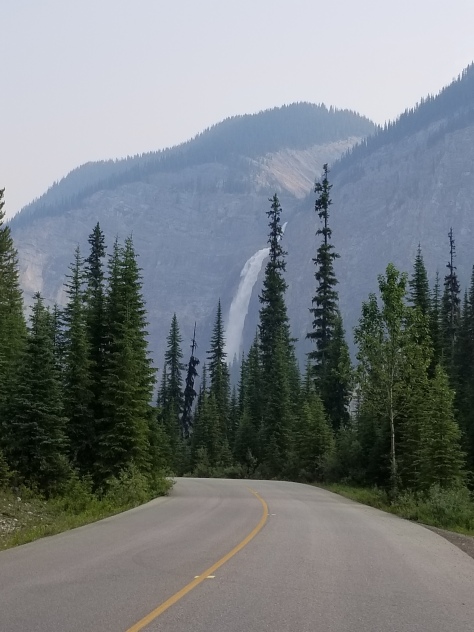 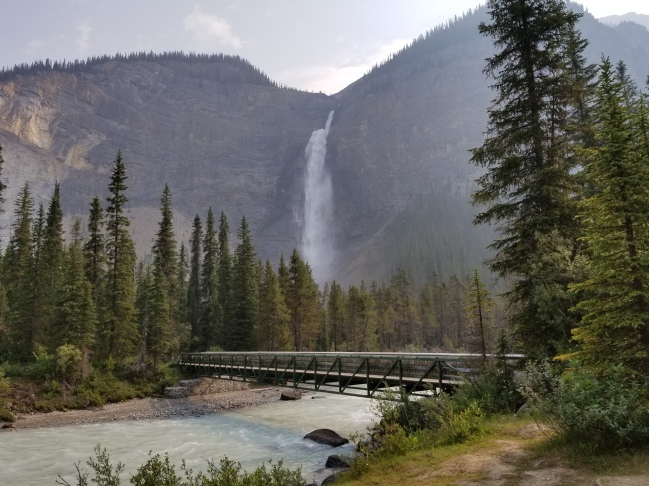 From the falls, we went back to Highway 1 and took it over to the Icefields Parkway. We only rode far enough up to see Crowfoot Glacier, Bow Glacier and Lake, and Peyto Lake. Unfortunately the wildfire smoke was pretty bad around the mountains here as well, but we were able to get some decent pictures anyways. I’m not sure what color you would call Peyto lake, but it was absolutely stunning to see in person, even with the thick cloud cover on the far half of the lake. 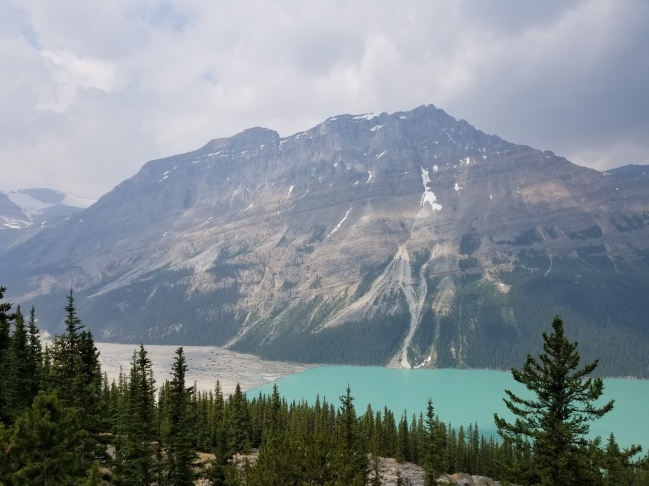 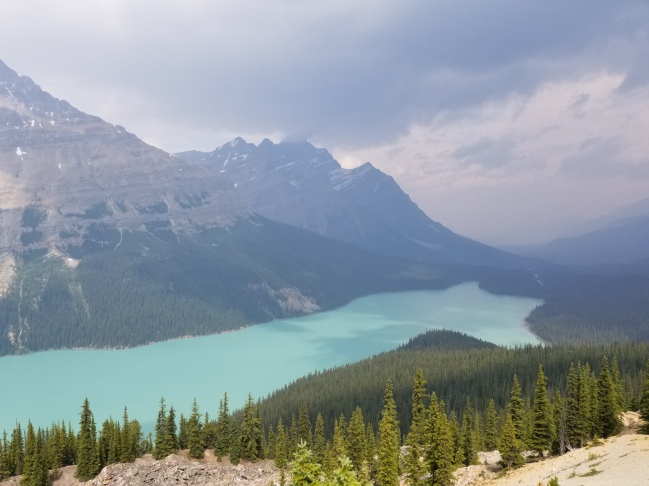 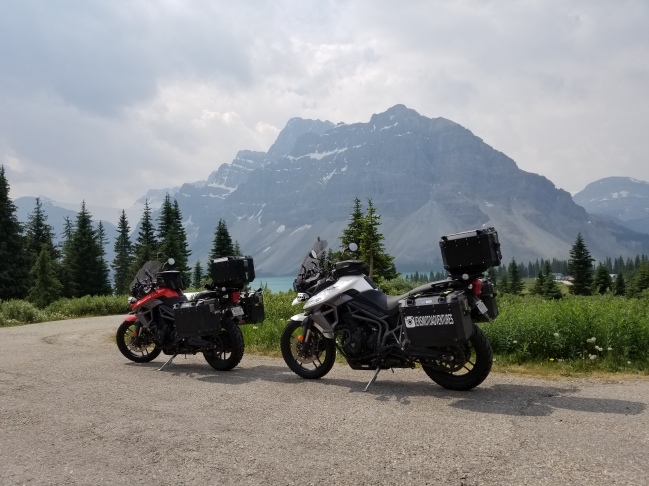 After we saw those, we backtracked down the parkway to Lake Louise. I had actually intended to see Moraine Lake here, more so than Lake Louise, but it was absolutely packed with tourists at this point, and they wouldn’t let us turn down the road to Moraine Lake when we came in. We ended up at Lake Louise instead, and when we went to park the bikes, low and behold, we parked right behind the Goldwing Trike yet again! We walked out to the lake and took some pictures, and when we came back, we ran into the couple again, and we joked that we didn’t think we would see each other again after the last time, but that this really would be the last time because they were heading toward Jasper, and we were heading to Canmore. They were such a nice couple, and we enjoyed talking to them, and it added a bit of humor to our trip that we just kept running into one another.

When we left Lake Louise, we didn’t realize it until it was too late, but there was a turn off for Moraine Lake on the way out, and we missed it, but there was no way that we were going to go back through all of that madness to get to it. I’m still bummed that I didn’t get to see it, but we will definitely be coming back here for sure, as we have both fallen in love with the area and want to see it without all of the smoke hindering our views.

As we left there, instead of hopping back on highway 1 to Canmore, we stayed straight to take 1A instead. A friend of mine had told me that it is a beautiful scenic route and that it is less congested. He was right, it was beautiful, and much less congested, and we actually got to see a black bear right up beside the road. There was a gas station right across the road from where it was, so we pulled in there and I was able to get some video of the bear from a safe distance, so that was really neat.

We very much enjoyed the ride down 1A, but eventually it connects back with Highway 1, so we took that on to Canmore. Unfortunately we were too early to check into our hotel, so we went in search of food to pass the time. We ended up at The Drake, where there were two other motorcycle couples having lunch. One of them was on a BMW GS that was loaded down and had stickers from all over the world stuck to it and said, “Africa 2012” across the windscreen. We didn’t get to talk to them, unfortunately, but Dwayne checked their plates when we left and they were from Florida. The other couple was on a Harley and they were from Saskatchewan. We did talk to them a bit, and they were very nice.

The view from our lunch sport at The Drake: 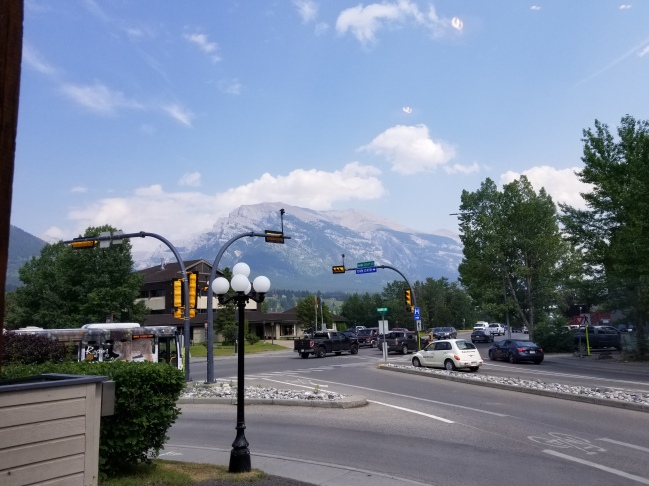 Once we were finally checked into the hotel and had the bikes unloaded, I told Dwayne there was one more road that I wanted to hit before we called it a day, so we went in search of the Smith Dorrien Trail. It was an incredibly fun gravel road that goes up over the mountains, and then there are beautiful lakes alongside it the rest of the way. We had a blast standing on the pegs and bombing down that gravel road, and the views of the lakes with the mountains were absolutely stunning. The views would have been worth the ride regardless, but the ride itself was an absolute blast. I was so happy that I found that while playing on Google Maps! 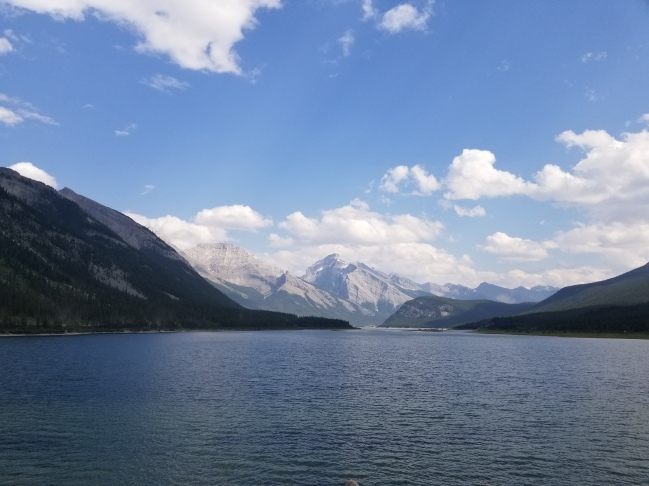 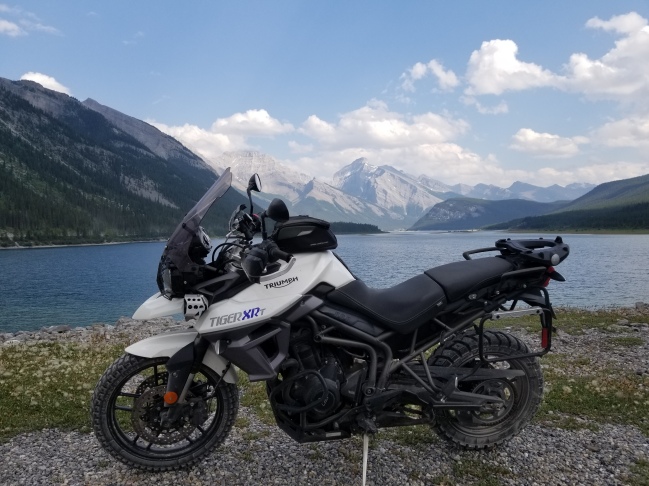 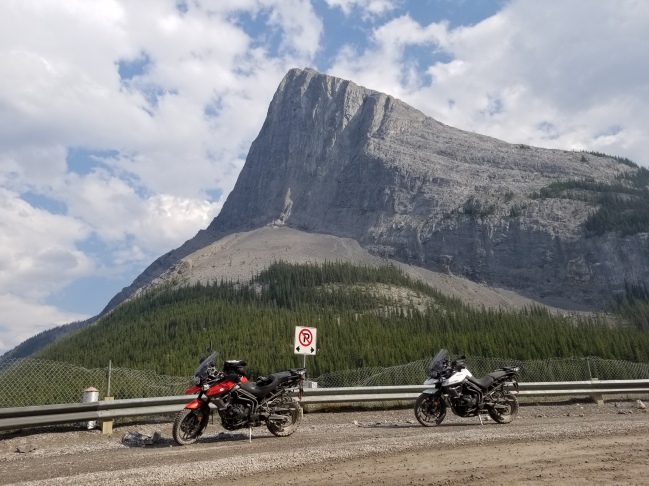 Here are a few more shots from around our hotel: 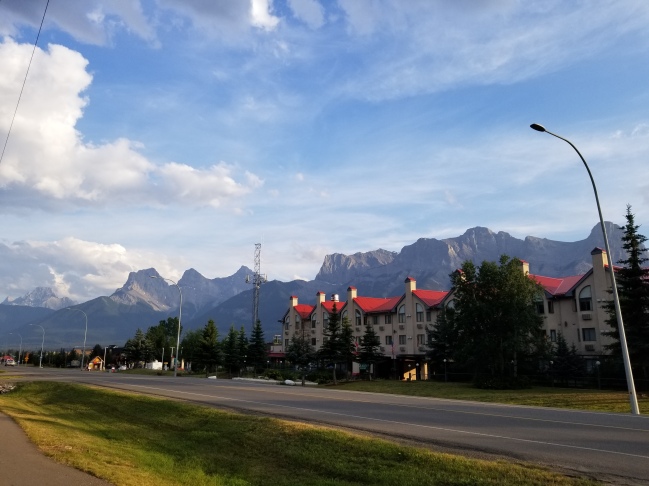 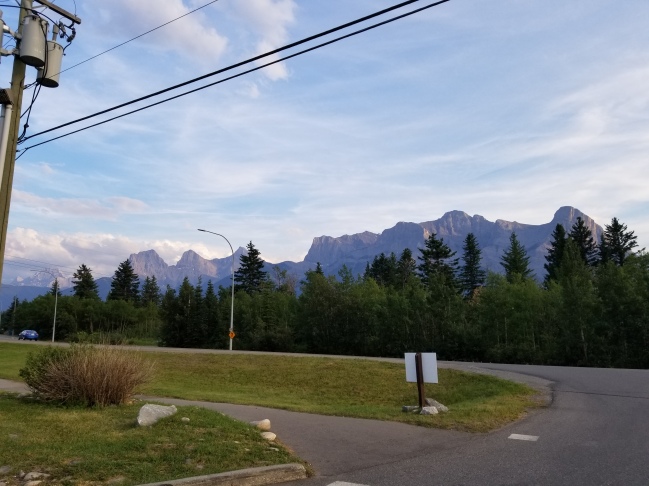