We managed to get a full 8 hours of sleep last night, but we’re still up at 7am. After a quick breakfast and a coffee run, we loaded up and hit the road.

It was nice and cool when we left, but it didn’t take long before the heat started to rise. We stopped by a rest area with a lookout of the Theodore Roosevelt National Park to take a break and snap some quick pictures, and when we left the temperature had risen 4 degrees in the short time we were there.

Once we reached Montana the speed limit rose to 80, and the traffic was sparse. We stopped for lunch in Miles City, Montana, and it was 92 degrees. Soon after we departed from there, it rose to 97, and it ended up topping out at 100 degrees, with full sun. It was miserable. I was so ready to get to our hotel and get out of my gear.
Unfortunately it appears that this is going to be a common occurrence on this trip, as the heat wave doesn’t look like it will subside anytime soon. It may end up screwing up our plans, unfortunately. I’m not sure Idaho is going to happen as planned because it is supposed to be 103 degrees and we were planning to ride dirt there, which would be miserable in those temperatures. We will see what happens.

We finished the evening with dinner at The Beartooth Grill, where I had grilled chicken on top of a cheesy potato cake, covered with mushroom Alfredo. It was every bit as good as it sounds. Dwayne had a bacon cheeseburger with a fried egg and cheddar cheese. It was all really good. 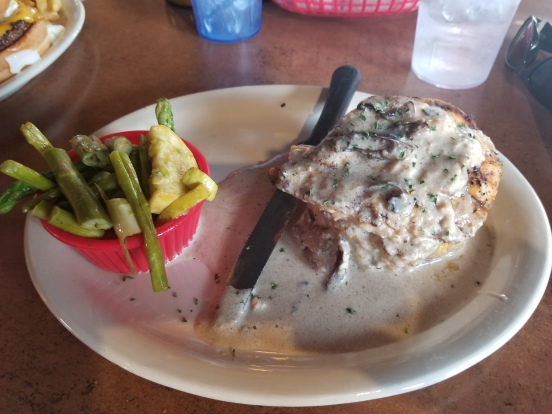 Tomorrow we will be riding Beartooth Pass after meeting a friend for breakfast in Red Lodge. Very much looking forward to that!