We left the hotel a little before 8:00 this morning and rode across town to hit US-197 South. We took that down to Dufur where we picked up Dufur Valley Road, which is a back road that goes over to OR-35, which goes around Mount Hood.

It was an incredible ride, each time we would come around a bend, we would get a closer view of Mount Hood. It is just unbelievable how massive and beautiful it is. Yesterday when we first saw it, there were no clouds and it was just there, out in the middle of nowhere, towering over everything, and I wish we would have had a chance to get a picture of it that way, but today it was surrounded by thick clouds that almost made it look as though they were erupting out of it. 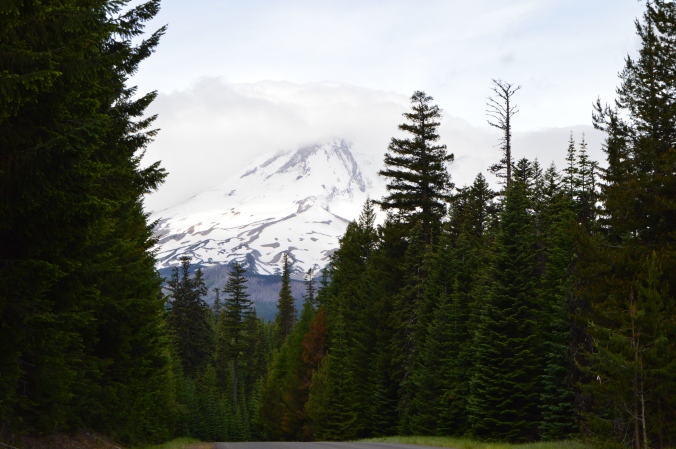 We stopped in multiple places along the way to take pictures of it from various distances. The last time we stopped an older gentleman in a van stopped and asked if we would like him to take a picture of both of us. We had only passed a couple of other vehicles the entire time we were on that road, so it was a lucky coincidence that he just happened to drive by at that time and that he was kind enough to stop and offer to take a picture for us. Unfortunately, the lighting was not right, and you actually can’t even see Mount Hood behind us.

The closer we got to Mount Hood, the colder it got, and by the time we had hit 35 and reached our highest point on the road, it was 46 degrees and the sky looked like it could start pouring rain at any moment, so we were in a hurry to get to US-26 which we took all the way over to Ontario. It took a while for it to warm back up after we finally did get started down 26, but we were just happy to have the sky look less threatening, because we did not have our rain gear on, or our liners in our gear, so 46 degrees and rain would not have been much fun!

The ride across US-26 was absolutely beautiful almost the entire way. If we had stopped to take pictures of every beautiful thing that we saw, we wouldn’t have made it to our hotel before dark. We did stop a few times though, and there were other times we would have liked to have stopped, but there were no pull-offs in those areas. We even rode through the John Day Fossil Bed National Monument, which we didn’t even know was on that road when we took it, but it was awesome, and we had to keep reminding ourselves to watch the road instead of looking up above us at the gorgeous towering cliffs. Unfortunately this was one of the places that we did not get to stop and take any pictures, but I can assure you, it was a huge bonus for us to get to see. 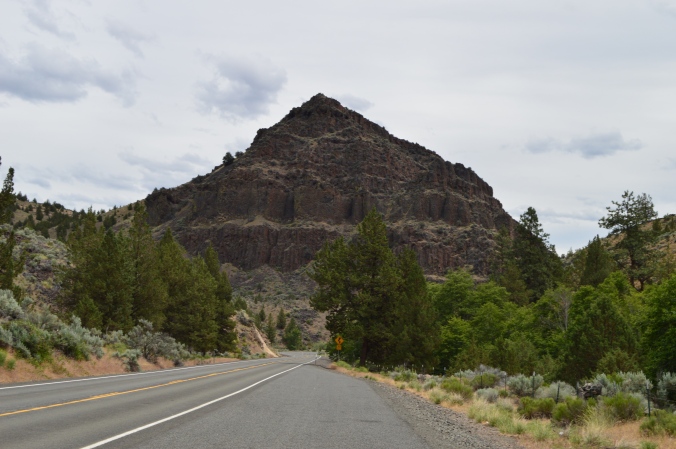