We were able to get an earlier start today, so we left the house around 11am this time. The weather today was supposed to be cloudy and 82, but it ended up being sunny instead, but it never really felt hot, it was perfect weather.

We didn’t have a destination or route in mind, we just knew that we wanted to head East since we hadn’t ridden that way in a while. We also knew that we wanted to avoid town and the local roads due to a large biker group being in town for their annual Memorial Day weekend rally. If wearing no gear other than your leather vest and riding slowly in large, tight groups is your thing, then more power to you I suppose, but I really don’t want to be a witness to it when something unfortunate happens, and I’ve got no patience for your geriatric pace.

We took a series of back roads to bypass Madison, and went over to hit one of our long time favorite roads, Hwy 250. We were less than thrilled to see orange signs stating, “Road Work Ahead” when we turned onto it. I told Dwayne, “Watch, I bet they are Chip Sealing it.” We went a little further and sure enough, the next sign said, “Fresh Oil.” and was quickly followed by another proclaiming, “Loose Gravel.” Yep, I was correct. At first we saw no indication that they had actually started the process, and I was holding out hope that we might get lucky, but after we wound around a series of tight curves down the hill, we found that they had indeed freshly chip sealed one side of the road. Of course it was the side we were traveling on, and they hadn’t even bothered to remove any of the excess gravel, so we had to move at a pace almost as slow as the biker group until we got to the end of it. Between the Chip Sealing and the slick rubber they are using to fill the cracks in the roads (we refer to them as “snakes”), they are pretty much ruining all of the good motorcycle roads in this state.

We eventually found a back road we hadn’t been down, so we turned off onto that, and from there we just wound our way from back road to back road. The only issue seemed to be that every time we were looking for a road to turn onto, we kept finding ones that had signs stating, “Dead End” or “No Outlet”. This seemed to be the theme for the day, as I lost track of how many times we ran into those signs.

At one point Dwayne exclaimed that he had no idea where we were right as the road we were on came to a T with another road. We decided to turn right, and we quickly recognized an old house and realized we had indeed been on that road before, we had just come from the other direction the last time.

We followed alongside a river, although it is named Laughery Creek, it was definitely a lot wider than a “creek”, though perhaps that was due to the recent flooding. It eventually flowed into the Ohio River, but just before it did, we noticed an iron bridge down a side road right before Old Hwy 56, so we turned to go check it out. It was called the Triple Whipple Bridge, and it was originally built in 1878, and it was rehabilitated in 2008, but is now used as a pedestrian bridge. The wooden posts in place to keep motorists off of the bridge are spaced fairly wide though, so I broke the rules a bit to get a better picture.

From there we rolled through Aurora for fuel and a bathroom break, and decided to head over to Milan to Hog Rock BBQ for lunch. We split an order of their amazing Loaded BBQ Potato Skins, and a fish sandwich. Weird combo, yes I know, but it was all good, lol.

We continued our back road wanderlust exploration after lunch, and we swung by another bridge that we had found on a past adventure, but hadn’t been able to get a picture of due to a farm tractor crossing it. This bridge is also over Laughery Creek, although it is much further up stream and much smaller since it isn’t near the river. It was built in 1916 by the Oregonia Bridge Company and is still in use today. 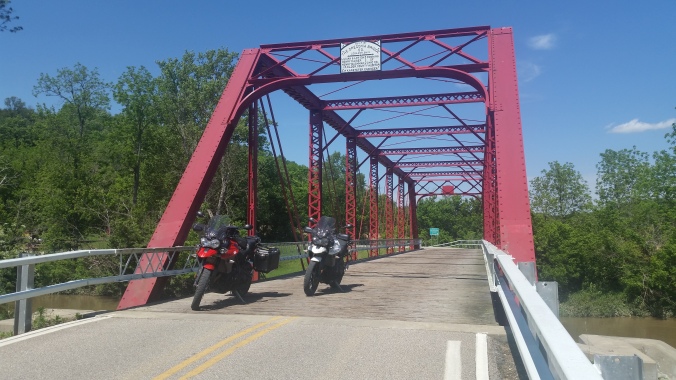 After that we managed to find some really awesome roads we hadn’t been on before, but eventually we came out along the Ohio River again just outside of Madison, so we rode into Madison and hit another back road that we had been on before, but that we knew was awesome. At this point, I felt dialed in on the bike, and we were having a blast on the well-paved, curvy road. Then all of a sudden, we ended up right back at a cross road that we had been at before we took the turn that led us down to the river. It always cracks me up when we are out riding like this and we end up making circles.

We had plans to meet up with Dwayne’s mom and uncle for ice cream this evening, so we turned in the direction of home and took another one of our favorite curvy roads along the way. Our total mileage for the day was 220, and it was such a wonderfully perfect day. The weather next week looks like it is going to be amazing if the current forecast holds true, so I’m looking forward to more adventures then!