I didn’t get a chance to write an entry for Monday, but we took Monday off work and went riding instead. We didn’t get going til almost 2 because we didn’t get to bed until 6am, but the weather was perfect, and it was a beautiful day.

We didn’t have a set route in mind other than checking out another bridge that we hadn’t been to yet, and another creek crossing. Both of these features were down gravel roads, and they were close to each other off of a road that we travel often. We went to the bridge first and stopped to take some pictures and check out the surroundings.

After that we went to check out the creek crossing. We had intended to cross it, but when we got there the water looked fairly deep on the far side, and the slate on the bottom was covered in moss, so we decided to play it safe and turn around instead. If it weren’t for the fact that we have a huge trip coming up in less than 90 days, we would have went for it, but we did not want to risk going down and tearing something up that may be costly to fix. We’ll be coming back for that crossing after the trip 😉 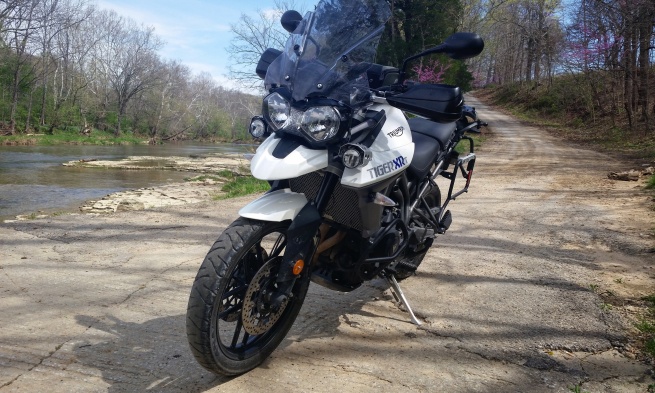 The rest of the day we just wandered around, enjoying the beautiful day and being on the bikes. We ended up riding about 50% pavement and 50% gravel. It was fantastic. 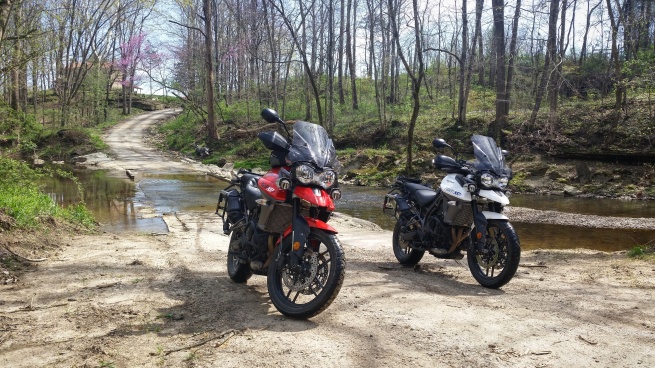 On Tuesday we hopped in the pickup and drove down to Tennessee to go hiking for a couple of days and to see our friends Mary and Ryan. We had such a great time catching up with them, and hiking in the Smoky Mountain National Park on Wednesday. We came home yesterday, and today we went riding again. 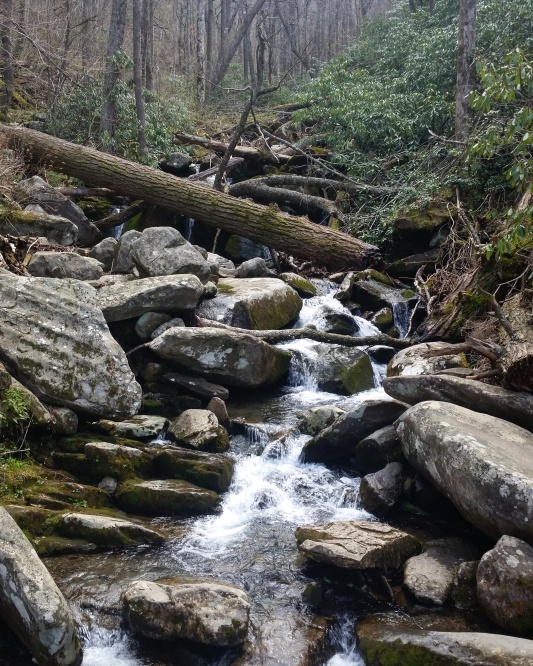 This time we got an earlier start, hitting the road before noon. We didn’t have a destination in mind again today, so we just took off on the back roads. About 20 minutes from home Dwayne remembered that he had forgot his wallet when we stopped for gas, luckily I had mine, but he decided to circle back to the house to get it after that.

When we left the house again, we decided to go check out a river crossing close to our house that I found on Google Maps a while back. It was down a gravel/dirt road, but when we got there, the water was moving very fast, and there was a 3 foot drop on the side that the water was rushing towards, so once again we decided to turn around.

From there we continued roaming the back roads, hitting some gravel here and there along the way. At one point we had turned off of a gravel road onto a paved road, and we were cruising along, and all of a sudden we popped over a hill and without warning the pavement turned to gravel. I had about enough time to slow down from around 45mph to 30mph before my tires hit the gravel. It was fine, but it definitely gave my heart a jolt!

We were both starting to get a little hungry, but there aren’t many options for a meal in that area, so we decided to ride about 30 minutes further up to a little restaurant South of Bloomington that we like called Scenic View. The service is usually kind of “Eh” but the food is delicious, so it makes it worth it.

Once we had our stomach’s refueled, we hit the road again, this time with a mission to find another abandoned bridge. We took Tower Ridge Road, which is a gravel road that goes through the Charles Deam Wilderness Area that I’ve written about in the past. It is pretty much perfect right now, since they haven’t added any gravel lately, so it is mostly dirt with a thin layer of gravel. Unfortunately it hasn’t rained lately, so it was rather dusty. We had to pull over and wait for a car that had turned in front of us to get further down the road so we didn’t have to ride in his cloud of dust, then about 3/4 of the way through, some jerk came up behind us and then flew past us, blinding us with his dust cloud to the point we had to stop and wait for it to clear because we couldn’t see anything ahead of us. I really wanted to give him a piece of my mind, but instead I just waved a middle finger at him, not that he could see from the dust cloud, but it made me feel a little better, lol!

We hit a few more gravel roads on the way to the bridge, including the road to the bridge, which had a section that went straight up a hill. We should have taken the time to stop and put the bikes in off road mode for this section, but we didn’t know about it until we came to it, so we just went with it. They made it up it okay, but the traction control was having fits the whole time. We did turn off road mode on when we were on the way out, though, and they handled it much better.

This bridge crosses a creek that feeds into Lake Monroe and the road that it is on used to connect with the small village of Elkinsville. At one time it was a thriving farming village, established in the 1850’s, but between 1962 and 1964 the government utilized eminent domain to evacuate the village in order to construct Lake Monroe. There is a monument there that tells the story on one side, and has the names of the families who lived there on the other. 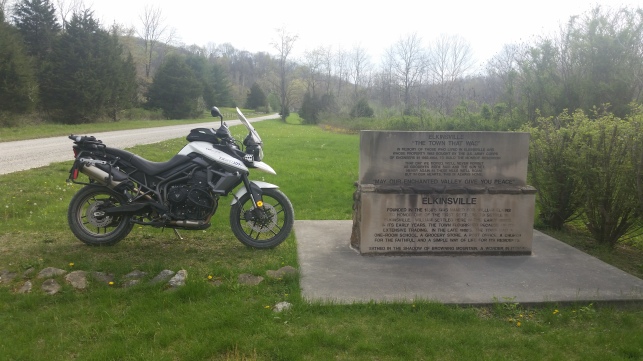 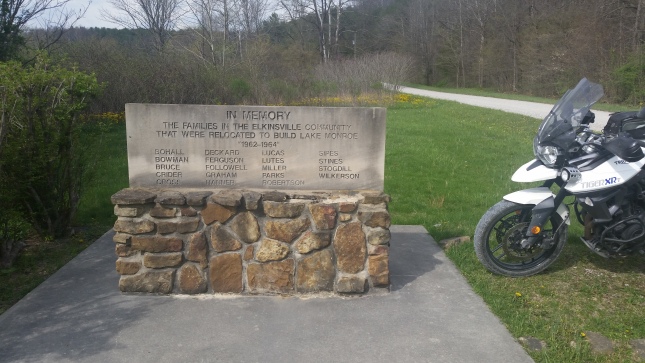 After we left there, we started heading back towards home on Hwy 135. I’ve mentioned this road before as well, it is very curvy and fun, and we were enjoying the ride when a Fiat pulled out ahead of us from a side road. Luckily for us, the Fiat driver apparently likes to have a good time as well, as he traveled along at a good clip, keeping the journey enjoyable for us.

We decided to take the long way home by going down new roads we hadn’t been down before to see where we ended up, and we eventually pulled back into the driveway a little before 7pm. We went 216.7 miles in 5 hours and 55 minutes of riding time. It was about 50% gravel/dirt again today, and our Rever map was all over the place.

It looks like rain for most of next week, but we are keeping our fingers crossed for at least one day of riding weather.