I have always loved Fall, it has always been my favorite season, but possibly even more so since I’ve been riding motorcycles. There is just something about those cool, crisp mornings, followed by the perfect, warm afternoons.

Yesterday we took advantage of the warm temperatures and hit the pavement in search of some colorful fall foliage. We headed back up to a previous destination in the Hoosier National Forest to the Charles Deam Wilderness Area and the Hickory Ridge Firetower.

The trees were not quite as colorful as we had hoped, but it was a great ride, and we were still rewarded with a bit of color from time to time. It was 68 degrees when we left the house, but a few hours later it hit 76, and was pretty much perfect. 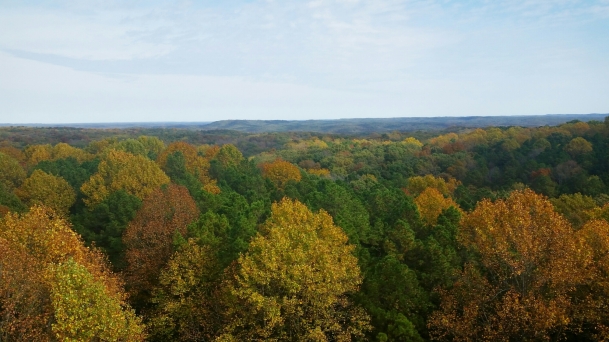 After we made the climb up the firetower for some site seeing and picture taking, we decided to turn off of the main gravel road onto some side gravel roads. We had no intended destination or time restrictions, so we just made directional desicions as we came to them and took our time soaking in the new sights.

At one point we came upon a creek that ran across the road, so we enjoyed getting the tires a little wet and muddy as we crossed that. After that we somehow managed to end up back where we had originally entered, so we started back towards home, but instead of taking the direct route, we just continued our carefree adventure, turning down new roads as we came to them, sometimes in the direction of home, sometimes not.

We made another small detour back to the park near our house that we found a while back, and the trees were actually a bit prettier there in some places. We rode all the way across the ridge this time, and down the winding road that took us back into the town. We had been past that road numerous times and had no idea that it led to such a beautiful little park.

We found plenty of roads we never knew existed, and saw a lot of things we otherwise would have never seen, including one of the most beautiful houses I’ve seen around here, which I would love to go back and take a picture of for future reference, but I’m not sure I would even know how to get back to it!

Eventually we pulled back into our garage with huge smiles on our faces and a lot of dirt and dust on our bikes and our gear. We both agreed on the same question and answer we always do after an amazing day of riding, “Who has it better than us?” The answer: “NOBODY!!!”

Stay tuned next week, it looks like another unseasonably warm week, and there are sure to be adventures awaiting us 😉