I promise that I have not forgotten this blog, nor have I intended to go so long without making a new entry, but sometimes life gets in the way! In this case, it has been due to us working 5-6 days a week almost every week since we got back from our West Coast trip, and the fact that it has been terribly hot and humid pretty much ever since we got back as well. Up until last Tuesday, we had only taken two short rides since we returned, and those rides weren’t really worth writing about, aside from one of those rides taking us down a gravel road along the Ohio River and through a couple of creeks, I’ll attach a picture from that day, but I’m going to write about our adventures last Tuesday and today. 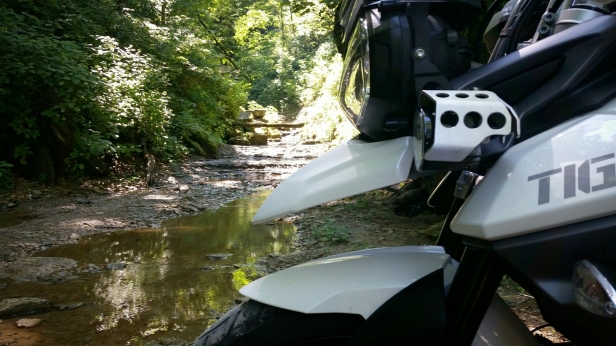 Last Tuesday we happened to catch a lucky break and it was 81 degrees with lower humidity, so after sleeping in until noon (we didn’t get in bed from work the night before until 6am) we hopped on the bikes and hit some back roads down to La Grange, Kentucky to eat lunch at a BBQ restaurant I happened to see on Google Maps called Big R and Shannon’s.

The ride down was wonderful, as the temperature was around 78 degrees, and the humidity was minimal, so we took our time and enjoyed the beautiful day. Once we got to the restaurant, Dwayne got the pulled pork sandwich with baked beans and waffle fries, and I got a pulled chicken wrap with sweet potato casserole. They only offered one BBQ sauce as far as I am aware, we weren’t offered a different one and there was only one kind on the table, but it was really good, so that was okay with me. The sweet potato casserole though, *sigh*, that was my favorite part. It was delicious! I highly recommend it if you’re ever in the area and are a sweet potato fanatic like I am. 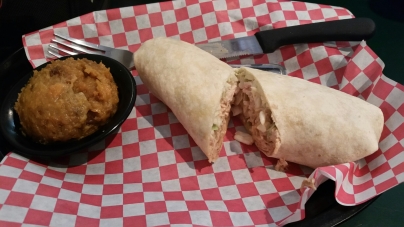 After we finished lunch and were both too full to even consider checking out the bakery next door, which I had considered upon arrival, we started back the way we had come, only to be quickly delayed by a long, slow passing train. If you’ve ever been to La Grange, then you know that the train tracks run right down the main street in the town. They don’t cross the main street like in most towns, they actually run right down it, in the same direction as traffic! Here is a picture I found on Google for those of you who have never been there:

It is a pretty neat little town, but I am sure that those tracks can be rather annoying for the people who live there. It was sunny and up around 80 degrees, so we decided to pull off into a parking lot on the corner and sit in the shade under a tree until the train passed.

Once we were passed the train, we set off to find some different back roads to hit on the way home. There are so many great county roads in Kentucky, some with beautiful old homes and horse farms with old, pre or early-1900’s stone walls that run along the road, others with nothing much to see but open fields and the occasional farm. The areas around Frankfort and Lexington are especially beautiful.

Once we decided it was time to head back towards home, we returned to more familiar roads and hit US-421 heading back towards the bridge into Madison, Indiana. We were about halfway between Bedford and Milton when we spotted a ’73 Honda CB450 sitting in a front yard with a for sale sign on it. I told Dwayne to find somewhere to turn around, because we HAD to go back and check that out!

As we were pulling up to the house another gawker pulled up in a Toyota Prius to check it out as well. By the time Dwayne and I had gotten off the bikes, he had already given it a good once over, and was standing talking to the older gentleman who was selling it. As we walked up, he remarked that we had ridden all over the place that day. It turned out he had seen us earlier in La Grange. He said the Tigers stand out since you don’t see very many of them around here, which is why he noticed us. He said that he has a Suzuki V Strom, and he asked if we ever look for people to ride with. Dwayne told him no, not really realizing why he was asking, that we usually just ride by ourselves. He was super nice, and we felt bad afterwards that we had essentially shot him down, especially since he told us afterwards that he has a hard time finding people to ride with that have similar bikes. He seemed like a super nice guy, and we may have enjoyed riding with him.

As it turned out, the bike looked a LOT better passing by at 55mph than it did up close. It was a total basket case, and the guy had spray painted the tank white WITH THE TANK ON THE BIKE! It was awful, I wanted to cry when I saw it up close, no beautiful old Honda deserves that fate, and honestly, had he been asking a couple hundred dollars for it, which is all that it would have been worth in that condition, I probably would have taken it off his hands and tried to restore it to its former glory, but when Dwayne turned the sign around on it where we could see his asking price and it had four digits and started with a 2, it was all I could do to refrain from telling the guy that he was out of his mind.

It all became a bit more clear to me though after his wife came out of the house and started talking to me. After listening to her tell me about giving birth without an epidural the first time and then with an epidural the second time (which I have NO idea how that conversation even started), I was pleading with my eyes to Dwayne to get me out of there QUICK! Luckily, he read my mind and we, along with the guy in the Prius, said our goodbyes and quickly got back on the road.

Once we were back in Indiana, the closer we got to home, the more humid it started to feel, and by the time we were back to the house, I was ready to get out of my leathers and into the AC. Unfortunately that beautiful weather was short lived, as the humid heat had returned and stuck around all the way up until today. We did manage to get our new Michelin Anakee 3 tires installed last week on Wednesday and Thursday, though.

We hit the road around noon and the weather was absolutely PERFECT. Mostly sunny in the mid-70’s with no humidity and a cool breeze, you really can’t ask for anything better than that. We took some back roads and gravel roads up to the Charles C. Deam Wilderness area South of Lake Monroe in Indiana. A guy I work with lives near there and told me that there were some great roads with beautiful scenery in that area, so of course we wanted to go explore! 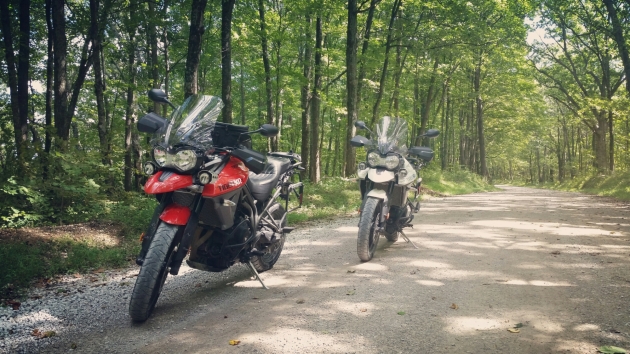 We took Tower Ridge Road from the East side to the West side, which is a gravel road that is 10 miles long and runs through the Wilderness area, which is also part of the Hoosier National Forest. About halfway down the road there is the Hickory Ridge Firetower. It was built in 1936 and it is 110 feet tall with 123 metal steps to get to the top. I, of course, couldn’t resist going to the top, and I am glad that I did because it was definitely worth the climb! You could see for miles, it was beautiful. I told Dwayne that we will have to go back in the fall because the trees should be magnificent this year with all of the rain we’ve had. 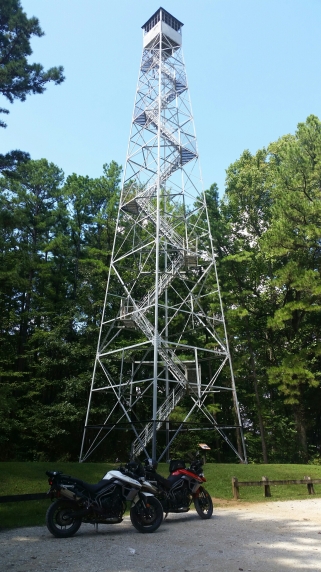 After we had both made the climb, we made our way the rest of the way down the gravel road which comes out on 446 south of Lake Monroe. We have ridden this stretch of road many times, but it never gets old. It has fantastic, sweeping curves, and is an absolute blast as long as you don’t get stuck behind someone pulling a boat or camper. Once we got to the lake, we found a shady place to park near the boat ramp to check the map to see where we wanted to go from there, and we decided to head back down 446 the way we had came and take a different road off to the West. Before we hit the road, I decided to make a quick pit stop by the restroom, and while we were there Dwayne spotted two beautiful Bald Eagles soaring overhead. I snapped a few pictures of them, but since all I had was my smartphone, they weren’t very good quality. I wish I had taken my Nikon with me!

We spent the next hour or so exploring new roads, before we both started to get hungry, so we headed back towards 446 again, and back up through the fun curves and across the dam at the lake to the Scenic View restaurant. We’ve eaten here 5 or 6 times now, and the food has been fantastic every time. In the fall they have some absolutely killer desserts, such as Maple Sweet Potato Cheesecake and a Pumpkin Sweet Potato Tart with Cinnamon Ice Cream, but we were too full after our entree’s today to order a dessert. I got the fish tacos, which were absolutely fantastic, and Dwayne got his usual View Burger, which is a burger with bacon and two types of cheese on a pretzel bun with a chipotle aoli. I’ve stolen a bite or two in the past, and I can confirm, it is a delicious burger, and that pretzel bun and the chipotle aoli are the key. It is named the Scenic View because it sits up on a hill and does have a wonderful view, and they have a great patio for outdoor dining to enjoy the view.

Once we were both sufficiently stuffed and ready for a nap, haha, we hopped back on the bikes and once again headed back down 446 through the curves. We went part of the way down a familiar road from there, and then decided to take a different road we hadn’t been down before. From there we snaked our way down different back roads most of the way home, occasionally hopping on a main road to get to the next back road.

It felt amazing to just ride all day and see new places and enjoy the beautiful weather. We were long overdue after working so many extra days lately, and lacking any enjoyable riding weather on our days off. We intend to head out again tomorrow afternoon as well, so hopefully I will have more to share with you tomorrow night!

We have just two weekends to get through until we start another 4-week long vacation, and just over two weeks before we hit the road on the bikes down to North Carolina for a few days, at which point I will surely have some great adventures and pictures to share with you all. Then in October we will be heading to the Barber Vintage Festival in Alabama, though we most likely will not be riding the bikes, I will still share stories and pictures from that even as well.