The weather yesterday was bright and sunny, but it was also cool and windy, so we decided to spend the day exploring new backroads again. We left our house and headed West, randomly taking turns as we went.

Not too far into our adventure we chose a road that turned to gravel. In the past, we would have turned around in search of more pavement, but today we giddily ventured on to see what the road had to offer. It wound its’ way up through the woods, occasionally at a fairly steep grade, until we reached the top of a ridge with valleys to either side. The trees have yet to grow their leaves back, but it was still quite beautiful there. The road then headed back down a ways before returning to pavement.

From there we continued our wanderlust adventure down unfamiliar roads, past numerous livestock farms where the animals would stare at and/or run from us as we passed. It is always so funny when the calves near the road will run into one another as they try frantically to get away. We experienced this sometimes on our old bikes, but it seems that the sound of the triple freaks them out even more, because it happens literally every time now.

After a while we came across a sign on the side of the road stating “Bridge Out”, but we were curious and decided to continue on anyways, which led us to this neat old bridge that had been baracaded off. We parked and snapped a few pictures and looked around a bit before turning back. 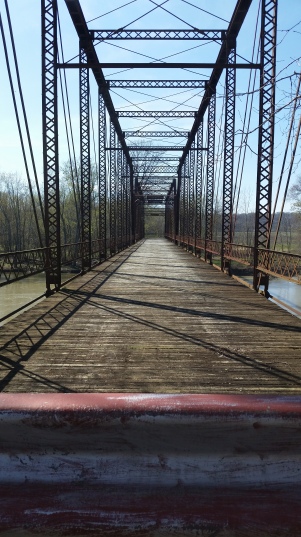 From there we decided to head back in the direction of the nearest town to make a quick rest stop, then found another backroad to take back towards our house. By the time we arrived, I was starting to get a bit cool from the wind, since I didn’t have the liners in my gear, but I still had a huge smile on my face.

The rest of the week doesn’t appear to offer great riding weather, with 20+ mph winds every day through Saturday, storms on Thursday, and cool temperatures to boot, but hopefully next week things will start to warm up and the wind will die down a bit and we can log some real miles again.