We intended to sleep in until 7 this morning, but we were rudely awakened by the couple in the neighboring rooms alarm clock at 5 instead. It legitimately sounded like it was coming from inside of our room, that is how loud it was. We figured that at this point we were already up and awake, so we got up and packed all of our stuff up and waited for 6am so we could have some free waffles for breakfast before hitting the road.

We left Spearfish and hit I-90 heading West until we got to SR-111, which we took up to SR-24. It was a beautiful ride across 24, and we were enjoying the scenery when we came around a curve and there was Devils Tower off in the distance.

After stopping to take some pictures, we headed on down 24. Just past Hulett there were some great places to pull off to get some pictures with Devils Tower in the background, so we stopped to do that, then headed on to Devils Tower.

On the road up to Devils Tower we saw a sign that said not to feed the prairie dogs, which we laughed at, until we looked around us and saw hundreds of prairie dogs in the fields around us. So of course we had to stop and take some pictures of the prairie dogs before going on up the road.

After we got to the top, we met a nice couple on a Harley from California and talked with them for a bit and we took turns taking pictures of each other with Devils Tower. 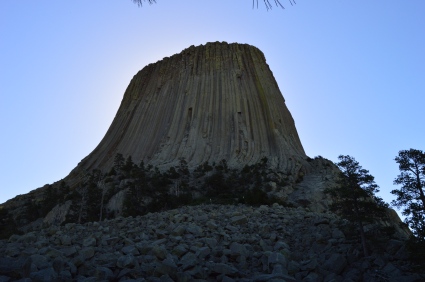 Once we were done there, we hit Hwy 14 back down to I-90 and hauled ass to Buffalo, Wyoming.  When we got to where you could see the snow covered mountains in the distance, Dwayne was like a little kid, he was so excited. This was his first time ever seeing snow covered mountains in person. Prior to this the only mountains he had seen were the Smokeys, and lets face it, those are just hills compared to the mountains out here.

In Buffalo we stopped at a Taco Johns to have lunch and to see how it compared to Taco Bell. It was okay, but I will definitely keep my Taco Bell back home, lol. After lunch we hit Hwy 16 which runs through the mountains in the southern part of the Bighorn National Forest. This was an absolutely gorgeous ride. It did get down to 52 degrees at the top, which was a bit cool with my mesh gloves and without my jacket liner in, but I hardly noticed with such beautiful scenery.

Once we reached Ten Sleep on the other side of the mountains, we gassed up the bikes and took a back road short cut over to a different part of Hwy 16 to avoid having to go through Worland. We continued on 16 through Greybull, all the way to Cody. It is pretty isolated out that way, with long stretches of road out in the middle of nowhere, but it is really beautiful out there.

Once we got to Cody, we went to our hotel and ate dinner at the attached restaurant, and then relaxed for the night.

We rode 383 miles again today, bringing the total mileage for the trip so far to 1,816.